XUII is a new stock promotion by one of the worlds best stock promoters and its already up 169% on the day! The funny thing is this is typical… The question is do their friends in the other big group plan to also promote this one or will they choose a different one? This promotion has a pretty heft budget and this is a new issue, most likely by means of reverse merger, so it looks like they aren’t going to be looking to let this one die quickly. Their last one HIDC didn’t last long however sub penny stocks rarely last as long as stock priced above $.20. Most likely this occurs because sub pennies rise several hundred or even a 1000%, and these gains occur more easily than higher priced penny stocks. Unfortunately they also are usually much less liquid and therefore a lot more dangerous which is why I rarely trades stocks below $.01 except when they are trading several millions dollars worth of volume. It would be nice if the stock promoter turned this one XUII one into the next POTG which at one point had a market cap of $1 billion and was pretty unheard of in penny stock land at the time.

Can They Do It Again With XUII?

XUII may end up being a great one although you never really know until after the first couple days so its always best to lock in a sizable portion of profits if you have them. I bought 40k shares at $.189 and sold 25k shares at $.251 and then remaining 15k shares at $.27. Profit on the trade was $2804 after commissions.  The key is whether they can hold their gains after day one through four but I do not like to gamble. I rather take the money when I have it and revisit the stock once it proves its not a one day wonder. If they can hold it above $.22 then there are enough true “believers” aka potential suckers and the stock can go higher. Its been an incredible 5 months in the market with many of the stock promotions doing great, but unfortunately summer is coming and that usually signals the end. 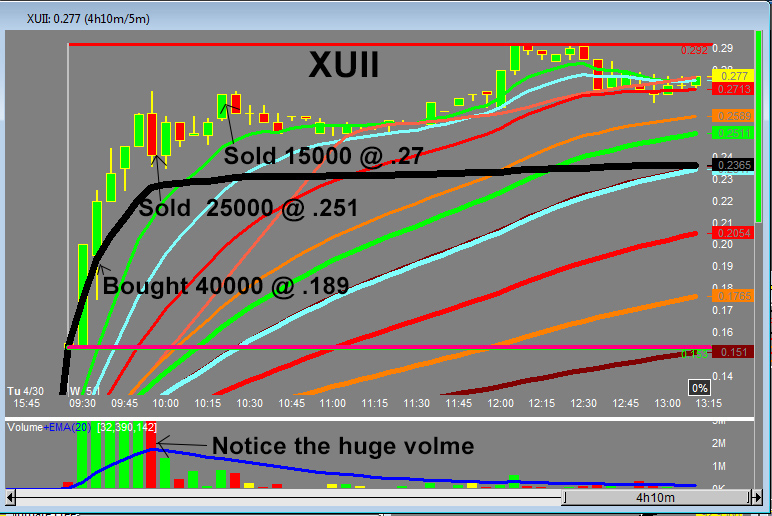 See How I Profit In Stocks Like XUII Get A Free 50 Page Ebook Now: hot penny stocks