SANP – The Next Promotion By The People That Pumped LEXG, RAYS & SEFE 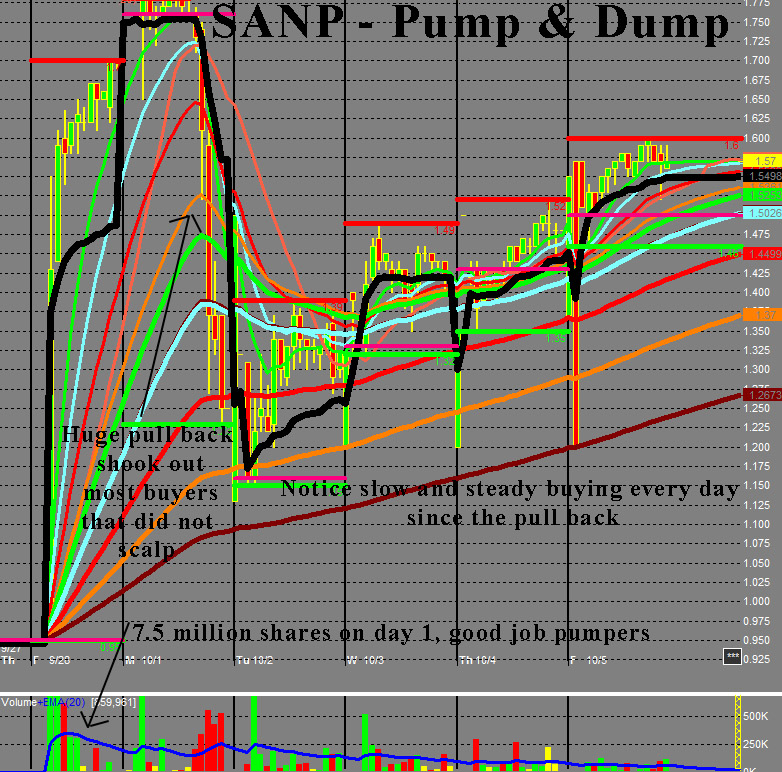 Two weeks ago I posted how I was waiting for a new hot stock promotion to trade since what I refer to as “pump season” was about to begin. This pump was released last Friday, 08-28-2012, but I have been away on vacation in Maui Hawaii, so I was not able to make a blog post. Unfortunately I was flying to Maui on September 28th so I was wasn’t able to trade this stock but I am not watching my system to trigger a potential trade setup.

As expected the pumpers alert was successful right from the beginning however the second day of the promotion resulted in a sharp pull back. Fortunately this was completely expected since stocks almost never move up over 50% in one day without a significant retracement and when penny stocks get near 100% gain they almost always pull back. The reason this occurs is because suckers  that were late to buy usually chase the stocks and the market always needs to punish these people and take their money before a stock can continue to move higher. SANP was their pick and the stock made a 89% gain on day 1. This pumper was the same one that promoted LEXG, RAYS and SEFE over the last 2 years so I was sure the promotion would be successful at least on day one. This pumper typically releases alerts on stocks that trade in the $.80-1.00 range and they normally trade up to the $2.50-3.50 range, however there first alert LEXG was extremely successfully and resulted in the stock moving up from $.10 to 10.00 in a couple months.

The pumpers decided to release there alert at 11:20 A.M. EST which is different from there previous alerts which were released in the afternoon around 3:00 P.M EST. This may have been way the stock made such a large move on the first day unlike RAYS and SEFE which had smaller first day gains and therefore allowed the stock to move more prior to the first major pull back.

I attached a 15 minute chart of the 6 days that this stock has been trading. (since was a new issue, but not and IPO, probably just a ticker change into a shell.) I expect $1.65 to be an important price for this stock to trade and close above. If this occurs this stock should make a move to $2.20-2.30 fairly easily since this pumper will probably try to keep this pump going for as long as possible before short sellers like Timothy Sykes attack it. There’s a good chance the stock could pull back again around 1.60-1.65 as well.  I will be watching for possible entr and eventually will look to short it if the shares are available.