BOPT – Eco-Trade Corp was the much awaited pick by SMA which was released Friday at 2:00 PM. This is the same time they released a number of their other picks because they were expecting to attract lots of buyers over the weekend.  Unfortunately BOPT was a repump and not a new issue like their other ones which means their was lots of bitter bagholders in the stock from the last time it dumped. Traders do not like repumps for this reason and usually ignore them. I did not trade it with much size and only scalped it quickly because I notice the wall of sellers at $.29.

Another Promoter Screws Up On BOPT

Their last pick SANP only went up 4 days from $1.00-1.60 and then dumped hard even though all their others went up for weeks. 60% isn’t bad but I always expect to see at least a 100% move from the groups that only release a couple times per year. BOPT was at a different price range than all of their other penny stock alerts as well since most started out at $1.00. This raised a red flag in my mind since I had no information to determine how they would do pumping a lower priced stock.  Unfortunately with SANP they pulled off some type of dilution financing for $500k which was released in a filing, but they did not do this on their prior alerts. For this reason I was cautious because a pumper is only as good as their last play. This is why so many promoters suck because they never had a good play and therefore a bad track record. This is only SMA’s 5th pick as well and even though it had a huge budget I doubt many will be willing to commit much capital. Still, the stock did trade 20 million shares so money surely did flow into this stock.

Always remember there’s no guarantees with penny stocks. A promoter could be on fire and then one day they get greedy and dump their next one out of the gate. Always have your guard up and make sure to size your positions correctly in relation to your account size and the variables that are involved. There’s no reason to ever go “all in”. If you have the desire to do this with stocks like “BOPT” go to Las Vegas and at least get some free drinks while you lose all your money.

When trading stocks with a real catalyst (not just a promotion), a history is good because it allows traders to analyze a stock using the chart. Unfortunately this is not the case with these “special” penny stocks. See the chart below. 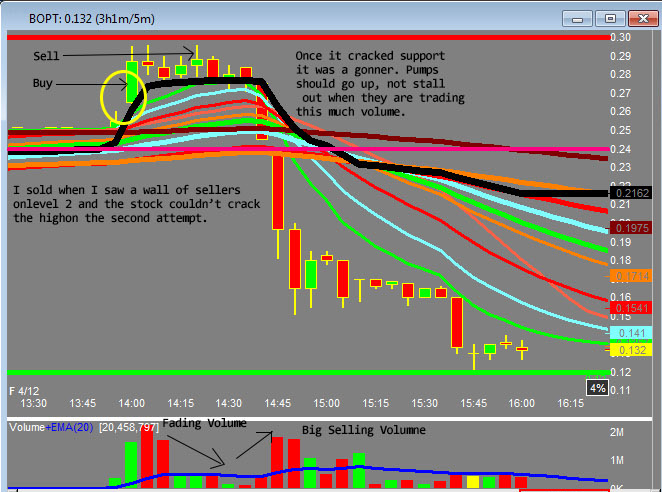 Free 50 page report on how to earn thousands trading penny stocks. Get it here