NNRX – The Penny Stock Trade That Made My Week!

NNRX was a stock that started to rise due to speculation it was going to be one of the next big promoters pumps. The stock had a nice run from $.93 to $1.49 and then an epic plunge. Usually stocks rise after a stock promoter releases their pick on a stock but in the case of NNRX this stock had already gone up and therefore when the promoters actually released their pump to the world on September 30th 2013, the stock imploded -69% all the way down to $.46. There were several fake out bounces that day and my system kept me from getting screwed on these poor quality setups because that is exactly what it does best.

I went long at $.48 after several longer term charts gave confirmation that at least a short term bottom was in. I used a 1 minute chart to enter the stock, and then managed my trade with a 5 minute as I always do with bounce trades. This was an ultimate bounce trade which was good for $.19 or a 39% gain in a few hours. My first target was $.60. My second target was $.66 and I finally stopped out on the remaining shares at $.64 when NNRX decided that the bounce was over and it was time to smack greedy bounce players that did not take their profits. Profit on the trade was $4,622. I nearly captured the entire move. I did not pick a bottom, but rather extracted almost the whole move before the stock later closed at the low eventually gaping down the following day to $.26!

The only thing that I did not like about this trade was that it happened around lunch time. I typically prefer a setup occurring before 11:00 am or after 1:30 pm EST because the volatility is much better. It much easier to get burned by the trading algo’s when you trade in the dead zone. None the less if a perfect setup presents itself I will always take the trade because I know my system will allow me to extract profits time and again regardless of the time of day. If you are sitting on the side lines scratching your head about how to trade profitably then don’t waste any more time or risk anymore of your money until you learn a profitable system like the buy sell zone. 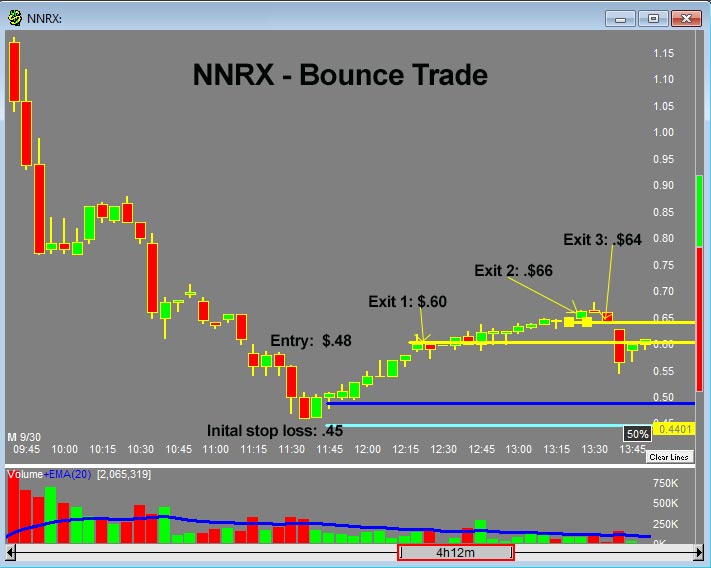