My Bounce Trade In The Penny Stock NUGN

It’s nearly summer time and the markets have been a bit sleepy lately, but the global markets have recently come to life which has caused some great volatility. The main reason for this is because the global markets are on alert due to the fact that Greece is approaching it’s day of reckoning. If they default on their bond payment, they could be kicked out of the European Union and this could cause a global market sell-off. Fortunately as a trader this has allowed for some great trades such as a what as I refer to as a bounce setup in NUGN earlier this week. This is an OTCBB stock and it trades on the OTC exchange and prior to around May 15th it was very illiquid. Then the promoters got a hold of it and the party really began. 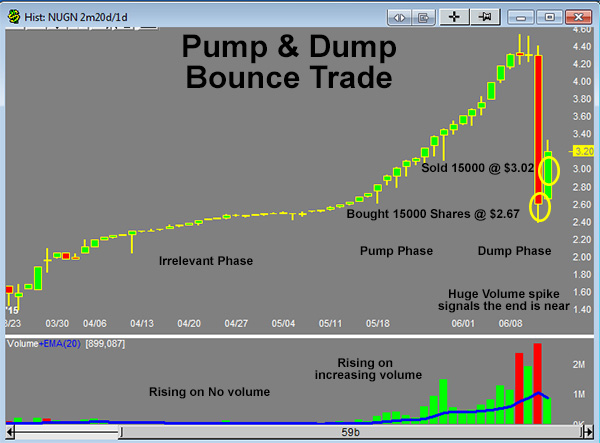 As you can see in the amazing stock chart of NUGN below they pumped this one all the way up from $1.00 to $4.50. Now I am not really interested in trading slow moving stocks but when the volume spikes that’s when the high probability trade setups arise. I am most interested in these huge volume days because this is when a stock has a large range and that’s what a trader like myself needs to extract a large profit from a penny stock.

OTC stocks are highly manipulated and contrary to normal supply and demand, they don’t just rise because people are buying them. They rise because somebody has an agenda to move the price of one of these worthless stocks up. I really don’t care what their agenda is because I am a trader and my main goal is to profit off the uninformed people that invest for the long term in these worthless stocks. Effectively what is happening is all of the believers are making money on the stock and then in minutes or an hour all of their profits disappear.  Fear and greed are what really determines what a stock does, especially when it comes to penny stocks like this which don’t earn a profit.

I bought 15000 shares of NUGN at $2.67 when my trading system told me it was time for a reversal. Not long after the stock began spiking and I was quickly up several thousand dollars. Normally I would lock in a partial profit, but this stock had sold off big time and I knew the short sellers would have to be crazy not to take their profits, resulting in a move higher to at least $3.00. The fact is one person always wins and one person always loses so you have to look at both sides of the trade to determine what is the best course of action. Trading isn’t just about the technical side of the market but it’s also about understanding the way other market participants think and determine when to buy and sell penny stocks like NuGene International, Inc. (NUGN)  The stocked finish the day $.30 from its low and I decided to hold my position overnight which essentially is what is referred to as a swing trader rather than a day trade.  I did this because 15000 shares is rather small with regards to the size of trades I am used to trading and my total trading account, but this stock only traded 2 million shares, which is less of a total dollar volume than I typically like to see when I take a larger position.

I sold 15,000 the next day as the short sellers continued to cover and the late buyers entered the stock. The stock went a bit higher to $3.20 and a typical new trader may feel disappointed about this but successful traders know it’s not smart to try to capture the entire move. It makes a lot more sense to just follow the patterns that you are familiar with because contrary to what the financial professionals are forced to say, “past performance is indicative of future performance. ”  This trade resulted in just shy of $5000 profit which is not bad for an overnight trade.